Smokers Lounge > Blogs > How to Smoke a Cigar 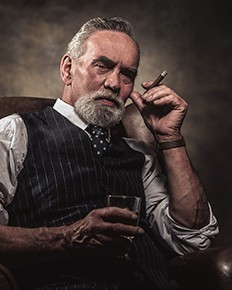 How to Smoke a Cigar

How to Smoke a Cigar

You’d likely be hard pressed to find someone who doesn’t know how to smoke a cigar – at least in theory. After all, how hard can it be – you put it in your mouth, light it and puff away. Right?

Not necessarily. Smoking a cigar and SMOKING A CIGAR are absolutely not the same thing – as anyone who ever wasted three bucks on a cigar purchased behind the counter at a gas station can certainly tell you. As a wise man once said, “anything worth doing is worth doing right.” If you want to know how to really smoke a cigar and get the flavor, the experience and the feeling that you were after in the first place, you’ll want to keep a few key things in mind.

So many first-time cigar smokers are doomed before they ever start because they make one small but important error – they don’t pick the right one in the first place. As with anything else, the most expensive cigar doesn’t automatically equate to the “best” cigar and vice versa. What you’re looking for is a cigar with a firm texture throughout its entire body. You’re looking for something that can generate a flavor response that you’ll actually enjoy.

Also, don’t buy a cigar at a gas station. Ever. At least if you don’t want to be judged (and rest assured, we’re already slightly judging you for even considering it).

Once you’ve picked out your ideal cigar, the next step involves properly cutting it. Unless you’re the manliest man who ever lived (which you’re not, unless you happen to be Nick Offerman. And if you are, you don’t need this article anyway), it’s not recommended that you cut a cigar with a knife. Any cigar shop worth its weight in tobacco will have a cigar clipper that you can buy or one that you can use right at the counter. If you ask nice, they’ll even cut your first one for you to make sure you don’t screw anything up too badly. Find criminal lawyer san diego.

If you’re cutting yourself, be sure to snip the end off with quick, solid motion to avoid tearing.

Mastering the Art of Lighting Your Cigar

When it comes to lighting your cigar, you have a few key options available to you. Die hard cigar smokers often like wooden matches because they tend not to interfere with the cigar’s natural flavor. Lighting in this way is also time consuming and leaves a lot of room for doing it wrong, so this might not be recommended if you’re a beginner. A torch lighter is often seen as the best choice for “absolute newbies” and “people who want their cigar lit NOW,” so that’s likely what you’ll want to use, too.

Put the end of the cigar in your mouth and hold the opposite end directly above the flame of your lighter. Don’t put the tip of the cigar IN the flame, as you’ll ruin the flavor. Give the cigar a few seconds above the flame and then slowly start to spin it, making sure you’re lighting the whole thing evenly. Remember that this isn’t a cigarette – you need to be patient. Focus on getting an EVEN light at all costs.

Now that your cigar is lit, you can sit back, relax and smoke away. Remember that cigar smoke is NOT meant to be inhaled. You can if you want to, but the taste of vomit will probably ruin much of that cigar’s flavor that you just spent so much money on. Remember that cigars are much bigger than cigarettes, so they’ll stay lit on their own – don’t feel the need to rush as part of what you’re paying for is the experience. Small cigars will take about 30 minutes to smoke, while big ones can take two hours or more. Just enjoy yourself – you’re about to experience one of life’s finer pleasures. There’s a reason why almost 150 million cigars are smoked in the United States each day.

Also, if you want to really impress your friends, don’t remove the label on the cigar right away. This is the sign of a novice. Leave that thing on until your cigar burns almost all the way down to its edge pacific dreamscapes. Then, peel it off and toss it in the trash like it’s the most natural thing you’ve ever done.

If you’d like to find out more about smoking the perfect cigar, or if you’d like to purchase premium cigars and other tobacco products, visit Cigar and Pipes today.

No trackback or pingback available for this article.

This site uses Akismet to reduce spam. Learn how your comment data is processed.

You must be 21+ to browse / purchase. Please verify you are of age to purchase from this website. All information is private and never shared.